Pearls have been covered with romance and myths since ancient times. These beautiful gems with organic origin have adorned monarchs and religious icons as a symbol of power, wealth and purity.

How pearls are formed

The pearls are produced by mollusks in salt water and by mussels in fresh water during the process of covering an irritant that has entered through the shell. The pearls are divided into natural and cultured. Natural pearls form in pearl-bearing mollusks without human assistance. Humans eventually learned how to take advantage of some mollusks’ natural abilities and developed techniques for producing cultured pearls.

Natural pearls motivated explorers and conquerors to seek after them and collect the precious gems thousands of years ago. The Persian Gulf had historically the most thriving saltwater natural pearl industry until the production diminished in the 1900s after the oil industry started developing. One of the first and most important results of Columbus’ voyages to the New World was the great wealth of pearls that he and others carried back to Europe.

One of the most amazing natural pearls that could not be cultured are the Conch Pearls with their soft bubble gum pink color. They hold very high prices and are extremely rare. A contemporary jewellery created by the designer Karen Suen shows amazing pieces with these extraordinary beautiful pearls.

Today natural pearls could be found mainly at auctions, most of them with historical value and reaching very high prices. A world record for a natural pearl was set in November 2018 at the Sotheby’s auction in Geneva when a pearl and diamond pendant that once belonged to the last Queen of France, Marie Antoinette, fetched the impressive US$ 36.2 million. The previous record for most expensive pearl jewel sold at auction was held by La Peregrina, a 50.6-carat necklace once owned by late actress Elizabeth Taylor and sold at Christie’s New York in 2011. 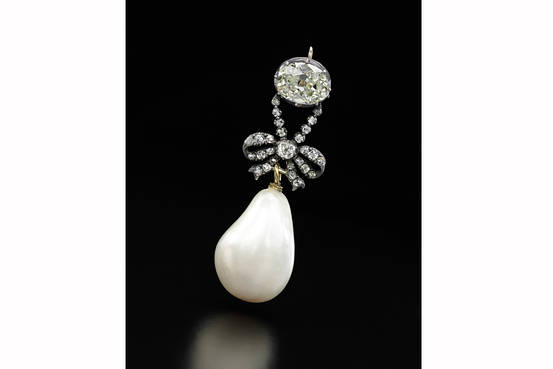 Cultured pearls however are dominating entirely the market today. Natural pearls are still harvested—most often as byproducts of gathering wild mollusks for food—but the quantity and overall market values are a tiny fraction of what they once were.

The beginning of pearl farming was set in 1916 when Kokichi Mikimoto managed for the first time in history to culture a whole pearl in a mollusk near the shores of Japan and start mass production. After that the commercial production of cultured pearls developed in other parts of the world as well.

Pearl farming turned to be not easy at all. It took centuries of experiments to successfully implement small beads, produced by freshwater shells, into the mollusks and nurture it carefully in order to harvest good quality whole cultured pearls after months and even years.

Akoya pearls: when most of the people think of cultured pearls, they usually imagine the Akoya pearls – perfectly round, 7 mm in diameter, white with a hint of pink. They are cultured in the salt waters near Japan and China and are taking the largest share in the world pearl market. 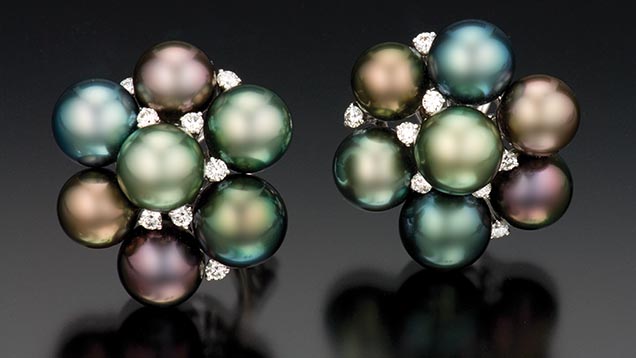 Tahitian pearls are known as the “black pearls” because of their mesmerizing natural dark colors that no other pearl has. They are cultured in French Polynesia and Cook Islands. Usually it takes between 16 and 24 months in order to grow a beautiful Tahitian pearl in the warm lagoons. These pearls are famous with their exotic colours that only the mollusc Pinctada margaritifera cumingii could produce.

Peacock is the trade term for a dark green-gray to blue-gray bodycolor with pink to purple overtones. That is the highest valued Tahitian pearl. Aubergine is used to describe dark grayish purple bodycolor. The yellowish-green color of the pearl is called Pistachio. The sizes are usually between 9 mm and 14 mm. The luster of the Tahitian pearls is known for its metallic sheen. 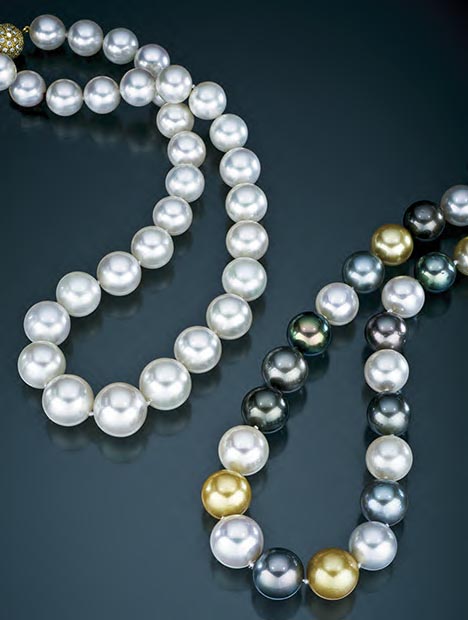 South Sea pearls: The natural habitats of the cultured South Sea pearls are the southern coast of Southeast Asia, the northern coast of Australia and the Philippines. Southsea pearls range in size between 8 mm to 20 mm. They are known as the largest cultured pearls on the market. These exclusive pearls are famous with their unique strong golden and silver colors, some of them could be creamy white as well. The thick nacre and the satiny luster are among their typical features.

Gemological Institute of America suggests seven value factors to judge a pearl quality: size, shape, color, luster (the most important factor: the intensity and sharpness of the light reflected from a pearl’s surface), surface, nacre quality, matching (applicable when two or more pearls are sorted).

Culture pearl treatments: Luster enhancement – some traditional techniques for improving the luster quality exist for centuries, called in Japanese “maeshori”. They are generally accepted by the trade, however the duration of the improved luster quality depends strongly on the techniques and the skills of the person who has done it. The improved luster may fade away from 6 months to years.

Dying – many cheap large Chinese fresh water pearls are tinted in black, greenish black or purplish black to imitate Tahitian pearls or in golden colors to imitate South Sea pearls. Many Chinese pearls are dyed in intense colors like pink, purple, red, yellow, orange, green, blue that does not exist in nature.

Irradiation – many salt water Japanese pearls in gray and darker tones are usually irradiated; Coating – sometimes all types of pearls are covered by silicone polymers in order to improve surface quality and only a professional check at microscope could reveal this treatment.

A lot of imitations of pearls exist on the market – from clam shell beads with lacquer coating, glass beads, Majorica imitation pearl (glass beads that are coated with pearly essence that imitates nacre), to simple plastic imitations.

We could distinguish some of them from the natural and cultured pearls simply by their heft if we gently toss them in our hand – the solid glass beads are much heavier than the real pearls, while the plastic imitations are much lighter. With close observation we could distinguish them as well – the imitations usually look too uniform and perfect and even cultured pearls after carefully sorting could never be so identical.

Last but not least, we have to take care of our pearl jewelry as it is extremely sensitive to chemicals, perfumes and hard surfaces that could easily damage them. After wearing your pearl jewelry always wipe it with soft, clean, damp cloth. Keep your pearls in a separate box and never close it entirely in order to have access to humid air which keeps their nacre in good form.

The romantic pearls will continue to tantalize women and to be one of the most classical and noble jewelry to wear.